Implementing a 360 degree feedback process will either be a destructive and devastating experience, or a developmental epiphany for those involved, depending entirely on how the process is structured. This focuses on the seven reasons why 360’s fail, and provides best practice solutions for each

A 360 degree feedback mechanism is a questionnaire that typically captures perceptions of key internal audiences (superiors, peers, subordinates and in some cases, key stakeholders external to the organization such as board members, customers, etc.) regarding the quality of an individual’s leadership and management characteristics, and compares those perceptions to the individual’s self-view. Inaugural 360 degree feedback should include senior executives, and should subsequently be limited to those who supervise others. Because a 360 degree feedback is not intended to assess one’s job performance, it is not a substitute for the performance review process.

Before undertaking a 360 degree feedback initiative, assess your level of commitment to using the best practices described below in avoiding the following: 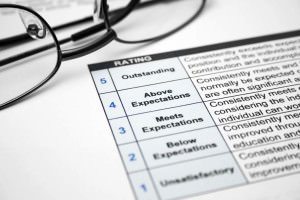 Failure to Sub Out the Process

Anonymity is absolutely crucial to a successful 360 degree feedback process. Hosting 360’s on internal computers simply cannot provide the necessary assurances. True or false, the perception of internally hosted 360 degree feedback is that selected individuals within the organization know everyone’s scores, and know who said what about whom. This erodes credibility at the highest levels and generates distrust.

Avoid these unnecessary distractions by choosing a qualified consultant to host your 360 degree feedback. Ensure your consultant can provide on-line instrumentation, has a strong background in facilitating senior executive work sessions, and a successful track record of executive coaching.

Failure to Customize the Questionnaire

Your consultant should collaborate with your senior executives to establish and define the dimensions of excellence for leadership and management in your firm. Based on this input, the consultant designs a well structured questionnaire that is customized exclusively to your organizational culture. Because those who’ll be evaluated by the mechanism have input into its construction, greater receptivity to the process is secured, greater validity is imputed to the results, and commitment to improve is easier to sustain.

Failure to Properly Introduce the Process

It’s not enough to explain the 360 process only to those who’ll be 360’d. The rest of the organization, from which respondents will be selected, should be briefed as well.

The CEO should conduct all-staff meetings to explain why the process is being inaugurated and how anonymity will be protected. The CEO should also inspire staff esteem for the courage and emotional maturity requisite of those who’ll be going through the process, asking that staff provide constructive but honest feedback.

Failure to Allow the “First Time” to be Self-Directed

Some organizations require that the results of one’s first 360 degree feedback be shared with one’s supervisor. Attendant to this decision are implications for one’s overall performance review rating and compensation. This potentially punitive use of one’s initial 360 is anything but constructive. It’s intimidating and generates fear around the whole process.

The first time one is 360’d, the results should be confidential, known only to the consultant and the individual, who meet monthly to develop and review action plans to remediate undesirable scores. Accountability for improvement is achieved when the second 360 is administered, and those results ARE shared with the supervisor. Because the perceptions of others take time to change, the second 360 should not be done until 18 to 24 months after the first. What CAN be shared with the supervisor regarding the first set of results is a Composite Report, which combines the scores of all those 360’d without revealing the identity of individuals. Composite reports can reveal shared characteristics of teams or departments, which can form the basis for the targeted improvements of groups. Additionally, those 360’d can compare their individual results to the composite results to see how their scores affect the group.

Undergoing a 360 degree feedback review is a fairly intense process. Indeed, the scope and depth of scrutiny imposed by a 360 is available through no other workplace experience. Delivering the results without providing any supportive follow-up is irresponsible and potentially hurtful.

After delivering an individual’s 360 results, the consulting coach should immediately secure a date for a second meeting. Assignments between meetings with the coach are typical, with the first assignment being the prioritization of undesirable scores. Future coaching sessions focus on facilitating the development of and monitoring the progress of meaningful action plans targeted at improving prioritized scores.

Because respondent selection can significantly skew results, choosing respondent pools shouldn’t be left to either the organization or the individual being 360’d. Additionally, respondents will be understandably concerned that their inputs not be identifiable.

Three respondents in each rating population is the minimum number required to protect anonymity. Those to be 360’d (perhaps in collaboration with relevant internal colleagues) should identify at least 5 people in each respondent population, (5 superiors, 5 peers, and 5 subordinates) from which the consultant then randomly selects 3. For purposes of a 360 degree feedback, these need not be direct reporting relationships; instead, a “superior” respondent can be anyone hierarchically superior to the individual to be 360’d, who works closely enough with that individual to be able to respond to the questions. Similarly, a “subordinate” need not be a direct report of the individual to be 360’d; they just have to have worked together closely enough for the subordinate to be able to respond to the questions. (Some organizations allow 4 respondents in each category, in which case those to be 360’d must identify at least 6 in each respondent population, from which the consultant then randomly selects 4.) Narrative comments must be aggressively sanitized to eliminate any chance of attribution.

Seasoned consultants aren’t unfamiliar with CEO’s reneging on the 2nd round of 360 degree feedback. The “new initiative” has become “old hat” and the CEO is no longer enamored; those who dislike the process (usually those whose scores were particularly low) lobby the CEO to abandon further efforts; and the constant pressure to distribute scarce resources among competing priorities are all reasons that imperil the critically important 2nd round.

The best way to ensure the 2nd 360 is completed on schedule is to include it in the initial contract, with a substantial penalty clause for abandonment. This may sound harsh, but avoidance of the following negative consequences provides more than adequate justification for such a step. (1) Without supervisory review of the 2nd 360, accountability for improvement by those who participated in the process cannot be meaningfully imposed, so the entire initiative won’t be taken seriously; (2) Absent the 2nd 360, those who worked diligently to improve their scores won’t have visibility into the results of their efforts, so they’ll be left with uncertainty and lack of closure; (3) Respondents who labored to provide thoughtful input will believe their opinions never really mattered in the first place.

In Conclusion, the 360 degree feedback is the only tool that provides quantitative and qualitative evidence of the causal link between management behavior and business outcomes. If we agree that managerial behavior significantly impacts productivity, employee attitudes, morale, retention, teamsmanship, and therefore the quality of customer interaction and overall business results, then we must exert the same level of scrutiny upon behavior as is traditionally imposed upon other functions. Unless and until management is willing to exert that level of scrutiny, the impact of management behaviors on organizational performance will not be measurable, and will therefore remain invisible, free to impede business results with impunity. 360 degree feedback mechanisms can improve these issues.